Of the over 400 climate scenarios assessed in the 1.5°C report by the Intergovernmental Panel on Climate Change (IPCC), only around 50 scenarios avoid significantly overshooting 1.5°C. Of those only around 20 make realistic assumptions on mitigation options, for instance the rate and scale of carbon removal from the atmosphere or extent of tree planting, a new study shows. 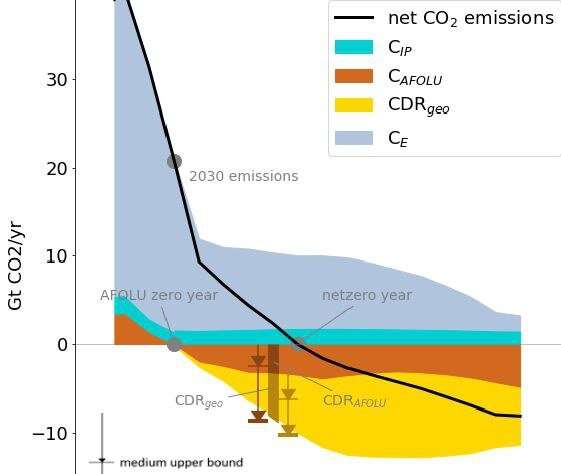 All 20 scenarios need to pull at least one mitigation lever at 'challenging' rather than 'reasonable' levels, according to the analysis. Hence the world faces a high degree of risk of overstepping the 1.5°C limit. The realistic window for meeting the 1.5°C target is very rapidly closing.

If all climate mitigation levers are pulled, it may still be possible to limit global warming to 1.5°C in line with the Paris Agreement. The findings could help inform the heated climate policy debate. "The emission scenarios differ in their reliance on each of the five mitigation levers we looked at. Yet all scenarios that we find to be realistic pull at least several levers at challenging levels," says lead author Lila Warszawski from the Potsdam Institute for Climate Impact Research (PIK). "None of the realistic scenarios relies on a single silver bullet."

"The energy sector is key to the 1.5°C target of course, with on the one hand reduction of energy demand and on the other decarbonisation of energy use and production," says Warszawski. "Yet we can't do away with the other strategies. Removing carbon dioxide from the atmosphere and for instance storing it underground also proves to be almost indispensable. Land use must become a net carbon sink, for instance by re-wetting peatlands or afforestation. Finally, emissions of the powerful greenhouse gas methane must be cut from animal production, but also from leaks in oil and gas extraction. This is quite a list."

The researchers drew from existing research to define bounds that delineate between the 'reasonable', 'challenging', and 'speculative' use of each of the levers by mid-century. The bounds quantify the range of emissions reduction potentials of each of the aggregate levers, which result from technological, economic, social and resource considerations. They can then be translated into contributions to keep warming at 1.5°C with no or low temperature overshoot.

A triple challenge for humanity

"This calls for an immediate acceleration of worldwide action to reduce greenhouse gas emissions by all available means," says co-author Tim Lenton from Exeter University. "We need a sustainability revolution to rival the industrial revolution. Otherwise those most vulnerable to climate change are going to bear the brunt of missing the 1.5°C target. This is a system-wide challenge—piecemeal actions and rhetorical commitments are not going to be enough."

"Humanity is facing a triple challenge to stabilize global warming without significantly overshooting the 1.5°C commitment" says co-author Nebojsa Nakicenovic from the International Institute for Applied Systems Analysis, IIASA. "First is to half global emissions every decade requiring a herculean effort and a decarbonization revolution by phasing-out fossil energy, a quantum leap in efficiency and sufficiency, and climate-friendly behaviors and diets; second to pursue nature-friendly carbon removal through afforestation and land-use change; and third to assure safe operating of Earth systems that now remove half of global emissions from the atmosphere."

Those scenarios classified by the analysis as unrealistically optimistic most frequently tend to over-estimate carbon capture and storage potentials, while others over-estimate energy consumption or reduction of non-CO2 greenhouse gases like methane. Still others make all too bold assumptions about dietary changes towards more plant-based food or about limited population growth.

The authors also took a closer look at the scenarios provided by the International Energy Agency (IEA) in 2018 and the one called 'Sky' produced by the Shell oil and gas company. Both scenarios foresee net emissions falling to zero globally as late as 2070. The researchers found that they do not lie within the corridor of carbon dioxide emissions over the next century that seems to offer a realistic chance of meeting the 1.5°C target. The Shell Sky scenario shows emissions levels in 2030 well above other scenarios considered in this study.

"The Shell Sky scenario has been called a pie in the sky, and that's indeed what it is," says co-author Gail Whiteman from the University of Exeter's Business School. "From a science perspective, this is quite clear. In the business community some still like it because it seems to offer, in comparison to other scenarios, a relatively easy way out of the climate crisis. Our analysis shows, however, that there are no easy ways out."

"The necessary emissions reductions are hard to achieve, technically but also politically. They require unprecedented innovation of lifestyles and international cooperation," concludes co-author Johan Rockström from PIK. "I understand anyone who thinks we might fail the 1.5°C target. Also, it is clear that irrespective of the specific climate target rapidly implementing strong emission reductions is key now. Yet I think limiting warming at 1.5°C is worth just every effort because this would limit the risk of giving some tipping elements in the Earth system an additional push, such as ice sheets or ecosystems like the Amazon rainforest. As technical as this all might sound, it really is about assuring a safe climate future for all."